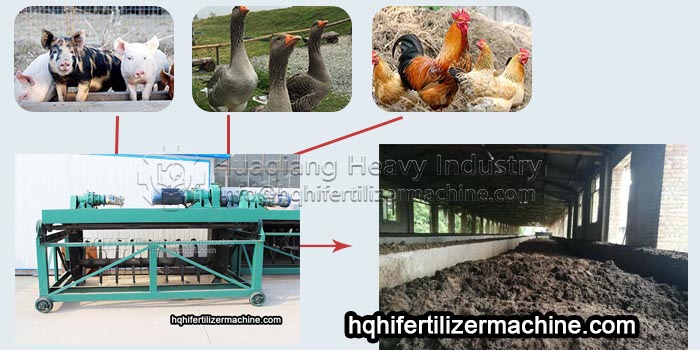 1. Pre mixing. The chicken (pig) manure and filling materials are forced to be mixed evenly in the mixer according to the proportion

2. Heating stage. The temperature of the compost gradually increased from the ambient temperature to about 45 ℃. The dominant microorganisms were thermophilic microorganisms, including fungi, bacteria and actinomycetes. The decomposition substrate was mainly composed of sugars and starch.

4. Cooling stage. In the high temperature stage, the death and activity of microorganisms were reduced, and the low temperature stage was gradually entered. At this stage, the thermophilic microorganisms began to occupy the dominant position and further decompose the residual organic matter which was difficult to decompose. However, the microbial activity generally decreased, the heat output of the heap decreased, the temperature began to drop, the organic matter tended to stabilize, the oxygen demand was greatly reduced, and the compost entered the maturity stage.

5. Aging stage. The fermented chicken (pig) manure has not yet been completely decomposed, so it needs to continue to be aged. The purpose of aging is to further decompose and stabilize the residual organic matter in chicken (pig) manure. At the later stage of aging, the compost temperature gradually drops to about 40 ℃, and the moisture content can be reduced to 20% ~ 30%. Humus is formed after composting.