Fermentation part:
Prefermentation
20 tons of cow dung, 10 tons of chicken manure, 20 tons of pig manure are used as raw materials, and added to the mixed pre-fermentation device to inoculate, fully mix and pre-ferment the organic materials.
Main fermentation
The three-in-one horizontal anaerobic fermentation equipment (patent equipment) is added, and the biological strain is added. The fermentation temperature is controlled at 50-60 ° C. After the fermentation, the color is dark brown, no fecal odor but compost odor. After the biogas is collected, it is burned into a biogas boiler through a water-sealed tank and a flame arrester to provide heat for the fermentation unit, granulation, drying and other units.
Then crushing the raw material which mainly include the straw,bean cake,bone powder,horn powder etc.Using the crusher machine we can choose the chain crusher machine to crush it,because the chain crusher machine can work continuously.At the same time,we need also to crush the inorganic fertilizer.Next to put them into the fertilizer mixer machine to mix the raw material according to different ration. 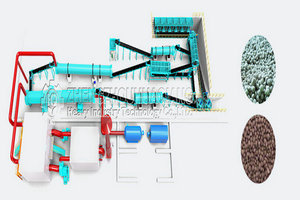 Granulating process:Due to the production of organic fertilizers,organic matter is the mainstay,the cellulose is more,the forming conditions are poor,and the living bacteria group with the function of fertilizing is added,and the production process is not suitable for contact with high temperature.The method of making granulation and drum granulation should not be adopted in thee method of material production.Because the two process require high pulverization fineness of raw materials and high granulation water,the water content should be about 30%.The load is large,the effective bacteria loss is also large,and the pelleting rate is low(about 60% to 70%).The dust is large during the production process and the operating environment is very poor.Therefore,for the production of organic  fertilizer,the environment extrusion method should be adopted.The production is better,the environmental extrusion has low requirements on raw material pulverization,and the molding rate is high(more than 95%).After pening,the moisture content of the particles is low,the drying load is small,the effective bacteria loss can be reduced,the dust is small,and the operating environmenting is small.The organic fertilizer raw material uses a special organic fertilizer granulator machine to make the organic fertilizer granulator.After granulation,the material is sent to the dryer through a belt conveyor for drying.The particle diametter is 3.0-4.0mm and the granulation rate is greater than 70%.
Previous Article Next Article
solution
products
tel
inquiry